A Lovely Dinner and Horrors Unspeakable

Tonight was a special night. Tonight my wife and I had a friend over for dinner and a board game. Now normally I am excited just to be eating good grilled food (which I was), but we also decided to play an old game that we realized we had not played since 2013: Arkham Horror. Now grilled steak, grilled yellow squash, grilled green onions, and grilled (pretty much burned, so tasty) crostini aside, Arkham Horror is a standalone experience. If you have not played it yet, it is a board game set in the fictional town of Arkham, Massachusetts in about the 1920’s. Players take on the role of investigators trying to figure out how to stop an unimaginable Lovecraft-ian monstrosity from destroying our beloved world as we know it. 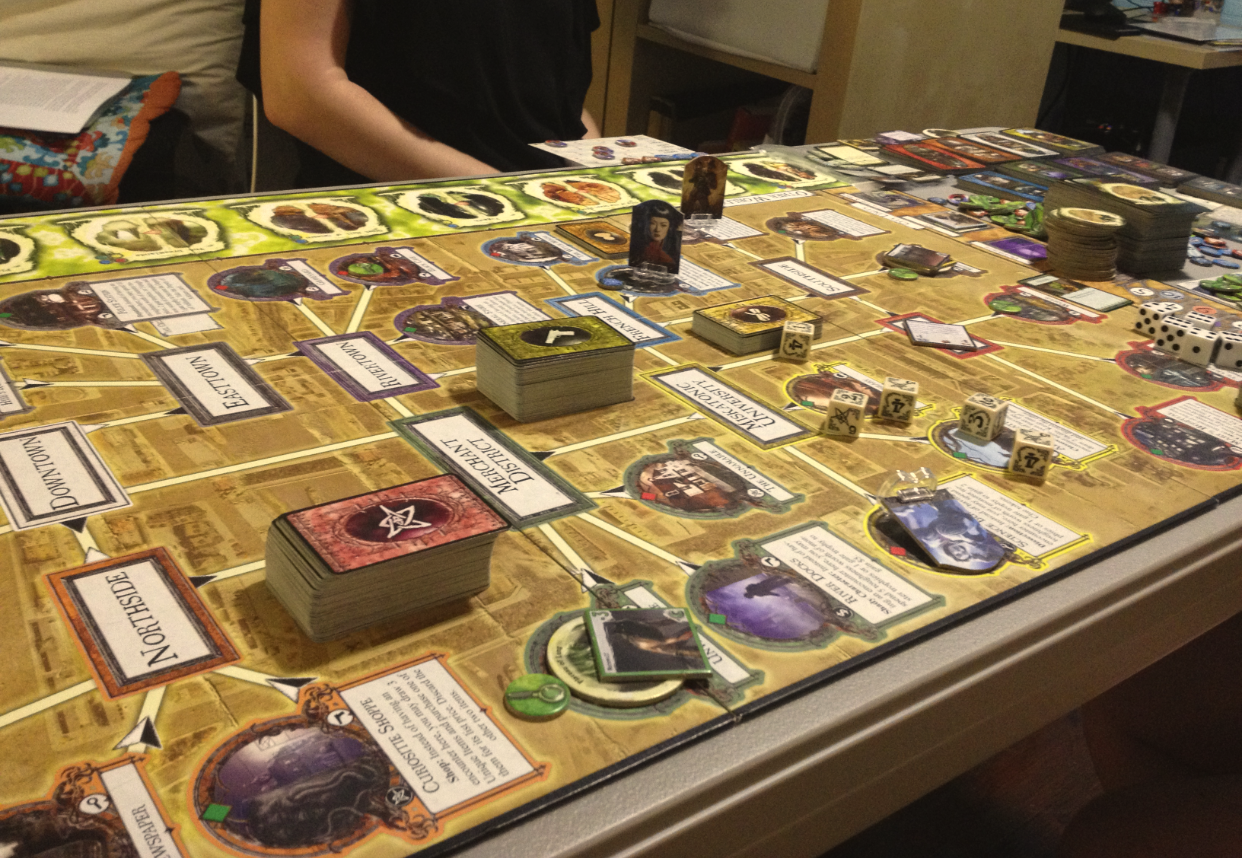 I’m not saying anything new when I describe the game as an interesting take on action/adventure role-playing in a board game. It’s Diet Role-play for people who haven’t taken the plunge and bought the D&D Next Player’s Handbook yet. You get a character with stats, you collect items and spells, and best of all, you work together with everyone to stop the apocalypse. This is Arkham Horror in a nutshell. Because I think they said it so well, I will paraphrase Shut Up and Sit Down’s sentiment in that it can be frustrating to play because so much of the game is luck-based and its more so a game of things happening to you than you actually doing anything of significance. It is a game of reaction instead of pro-action. This leads players into highly improbable and hilarious situations left to the whims of dice, which I believe is actually part of the fun. The group as a whole tends to create wild scenarios that explain the utter nonsense that has just occurred to a character. Some of my favorite highlights from my evening playing:

“I always get the perfect shot…WITH MY SUPERIOR FIREPOWER!! RAT-A-TAT-TAT!!”

In the end, as a team we decided that maybe the best way to end the unending nightmare was not to try and prevent horrors from spilling onto the world, but to confront evil at it’s source. We decided to let the elder god awaken and went toe-to-toe with Yig, Serpent guy of Quickness (or something like that). That’s right, we chose to let the ritual happen and deal with Mr. Big Bad himself. With our shotguns and tommy guns and magical shotguns and martial arts prowess (because if you can kill a Cthulhu with a boat, you should be able to kill a Snake God with your bare hands) we were able to defeat the extra-planar reptile-humanoid deity and save the world, even thought we were all cursed and on the brink of insanity.

So even when Arkham Horror can take what seems like a punishingly long amount of time (our session lasted about 3 hours for 3 players), with events that you cannot do anything about sometimes (“You found a stone. If you do not roll a 6, you are LOST IN TIME AND SPACE“), it is still such great fun to be have food and friends over to enjoy an experience together in group problem solving. And then you do your best to fill in the details yourselves to make the most entertaining conclusions from the situations befalling your party. And that is the essence of those physical interactions, of getting some people around a table to roll dice and take silly risks: making the best with what you have and having a blast while you’re at it.